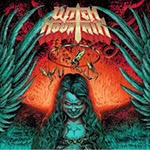 Witch Mountain is a slow and heavy doom metal band from Portland, Oregon, and have a great, powerful female singer. I have not heard their previous albums, but the new one released by Svart this month on LP and CD sounds pretty interesting and cool. The LP has only five songs, but four of them are rather long. "Psycho Animundi" starts the album with slow, heavy riffing and powerful vocals, but there are also a few more atmospheric, beautiful and melancholic moments. "Can't Settle" starts off like a long lost Saint Vitus number, but is rather bluesy as well, mostly due to the excellent vocals and solo guitar. Too bad that the singer is no longer with the band. We also get some very dark moments in the middle. "Your Corrupt Ways (Sour the Hymn)" is the longest track on the album and very slow, sad and forlorn. Again, I get some bluesy vibes but I like it! The title track is just three-and-a-half minutes of more experimental, droney funeral soundscapes and spoken-word plus angel-like singing, very nice. The last track on the LP is the beautiful "The Shape Truth Takes" and it's again very slow and melancholic stuff, but at first there is no heavy guitar, but things get heavier for a while in the chorus. Here the singer really shines, she has a wonderful voice indeed! The digital download and CD also have an extra track called in form of a Mountain cover "Don't Look Around" but I don't have that unfortunately. This is a great, bluesy and melancholic doom metal album with excellent vocals and great production so check it out if you into stuff like that.