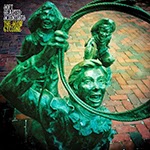 The latest promo package from Fruits de Mer also included the forth-coming new CD by Soft Hearted Scientists from Wales. These folk/psych/prog masters have been doing their thing for some time now and this is already their sixth album. For me and many others the first contact with this band was Fruits de Mer's 2013 2LP + 7" compilation called What Ever Happened to the Soft Hearted Scientists that gathered together some of the best tracks from their CD releases. Right after that we got the fantastic CD False Light, and since then they have released two limited, more unofficial type of demo compilations.

What we have here is a brand-new album recorded in three home studios. The album is divided in four parts, and the parts are divided in 24 actual songs and shorter passages. Some of the interludes/jingles are under one minute in length, and even the longest song, the folky "Drifting Away" clocks in at just over five minutes. It's also one of the best tracks with superb vocal melodies, acoustic guitar work and keyboards. The wonderful chorus brings to mind The Beatles or Syd's Pink Floyd. The track "You There Standing in the Shadows" (as well a couple of other tracks) has some cheap drum box sounds that give a cool effect. "Hermit Crab" sounds like a lost Syd Barrett outtake, and some of the other highlights include the melancholy "Away", the atmospheric and sort of Yes styled "Sonar Rays", the hypnotic and soft "Cobra Clouds", the droney "The Unknown Tide" and the final, gentle piece "Before I Was Born" that brings to mind Magna Carta. Like everything that I've heard by the band before, The Slow Cyclone needs some time to really get it and appreciate it, but after a while you just can't help falling in love with it. It's emotional, a bit spooky and weird but very deep and charming stuff. The CD is scheduled for release on 3 November 2014.