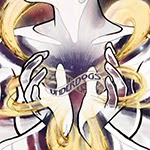 This is a 10-year-old band from Italy playing a mix of desert rock, grunge and some hard core, so not really my kind of thing. They have previously released at least two albums and one EP, and played with the likes of Nebula, Josiah, Brant Bjork and Colour Haze. The trio plays well and have pretty interesting songs, and I do like some of the album, like the second track "The Quilt" that is also the longest song in just under five minutes. The more grunge oriented stuff sort of annoys me to tell you the truth, but they always have sense for good melodies and it makes the album flow by anyway. They even have some pop qualities, so it's not just hard, heavy rocking. Especially the talented vocals and some of the more atmospheric parts might go down with mainstream music fans as well, there is even some electric piano and synths. One of the most radio-friendly tracks might be "Time Fighters" that has some beautiful passages. The Cardigans cover "My Favorite Game" is probably the heaviest piece, and the album is finishes with the acoustic "The Closing Song". Not bad at all, just not exactly for me.