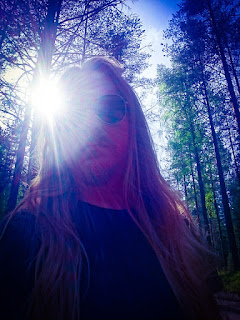 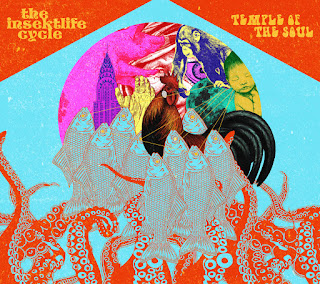 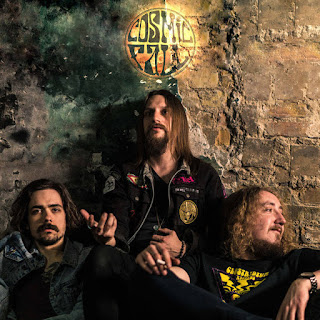 Okay, what we have here is a one-track digital single by Berlin-based heavy psych/stoner rockers Cosmic Fall. I have previously reviewed the power trio's latest album In Search of Outer Space (2018) as well as their drummer's a bit more 60s styled solo album. Both great albums feature just the basic bass/drums/guitar set up as does this new single that will be released to the public on Thursday.

So the new track "Lackland" is a long (8:32), totally instrumental, heavy mid-tempo stoner rocker that at first brings to mind Loop a bit with it's simple, hypnotic riff. The guitar soon gets wild in the Earthless style and the groovy rhythm section offers the perfect background for lots of heavy solo freak-out. Cosmic Fall is freaky, spaced-out jam band, make no mistakes about that. They really let it go wild and furious here and that's the way I like it. I could listen to this kind of heavy, killer jamming for hours and the eight-and-a-half minutes just fly by letting you ask for more ear-candy. I guess this digital single means that they have a brand-new album coming up soon which is great. Can't wait for that! Check out this taster on their Bandcamp site on the 13th of June and blow your mind with some honest, well-played psychedelic stoner rock mayhem! 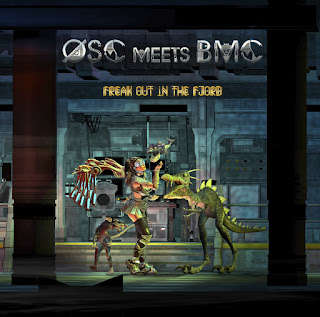 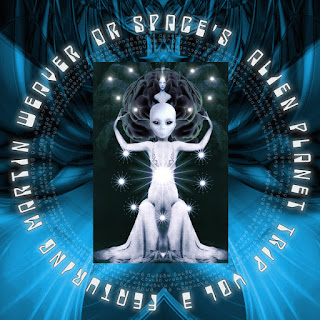 This is the third solo album by Dr. Space aka Scott Heller from Danish/Swedish/American etc. improvised psychedelic space rock group Øresund Space Collective. This time he has teamed up with Martin Weaver, a guitar player known for legendary bands Dark and Wicked Lady. As you maybe know, Scott is not a keyboard player but specialized in producing the most spacey, out-of-this-world windy-whooshy synth noises so don't expect wild keyboard solos or even much synth melodies. There are some arpeggios and sequences in there to help create a bit more solid structures to the very ambient , experimental and spaced-out pieces.

The synthesizers used were Nord Lead 2 virtual analog synthesizer, Korg Monotron, Custom Modular Synthesizer and OSCar. Martin has also programmed some percussion in Logic to give the music more form, like on the opener "Lost in ten Desert" and almost Goa trance-like "Encart Stnap" that ends the album and also has some spoken word at the beginning. My favourites still are the most cosmic, ambient and atmospheric pieces like the majestic "Veganporcotopia" and "Spacey Placey" that really take you to weird, wonderful places. It's very cool to have electric and acoustic guitar in there to make things more interesting, and the drum programming also works for the most part. Scott is the master of spacey analogue synths sounds and alien soundscapes. The production is top-notch and the album cover art perfect for the spacey moods within.  If you enjoyed Scott's two previous solo albums you will for sure love this one. This is very limited edition of just 102 copies on black and 216 on blue vinyl so if you want to get on this strange alien trip you'll have to act fast!