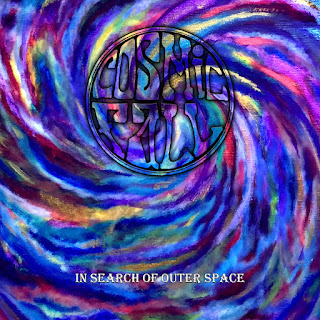 This is the third album by Berlin-based psychedelic stoner rock band Cosmic Fall. I have somehow missed their two first albums as well as the split with Aphodyl that was released last year. I really should have payed more attention as this is great stuff! As my readers know, I tend to prefer the really trippy, out-there bands out there and Cosmic Fall might not exactly be one of them, but they have a cool, groovy and mind-altering enough style. Their line up is now just a three-piece of guitar, bass/vocals and drums so don't expect spacey synthesizers or full orchestration here. It's more like back to the basics but done with style and emotion. The jamming and use of guitar pedals make sure that there still is enough psych vibes.

This new album that is already out on CD (vinyl version will follow at the end of next month) has seven tracks on it. The lenghty opener "Jabberwocky" is a groovy heavy stoner rock piece somewhere in between Monster Magnet, Gas Giant and Earthless. This track also has vocals unlike most of the pieces. I'm a sucker for long guitar solos and this is one of the bands that I enjoy the most during those. There are also some more laid-back, dreamy moments in there to keep things interesting and varied. Very nice! "Narcotic Vortex" is another heavy, mid-tempo stoner rock blast with some very cool jamming. On "Purification" the band stays rather tranquil and easy and I like it. "Lumberjam" has some more energy and brings to mind Earthless a bit. Never a bad thing, mind you! One of the most psychedelic tracks for sure must be the hypnotic and experimental "Spacejam" where the band gets closer to space rock. The last track "Icarus" still wins my vote for the album's best track. It starts off in a rather intense way, then gets spacey and chilled-out with some vocals and then bursts out into heavy psych again towards the end. Excellent! If you are a fan of heavy stoner jamming then this band definitely should be on your radar.