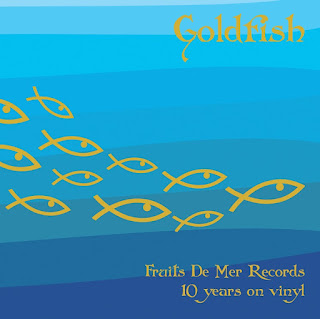 Goldfish is a massive 3LP + 7" set of some of the best tracks that Fruits de Mer Records have put out since rising from the sea in 2008. Since most of the original releases are long gone and highly collectable this is a very welcome addition to their catalogue. There is only one previous compilation LP with tracks from different early Fruits de Mer releases: Plankton put out by Record Collector in 2013. Keith himself states that "Goldfish focuses mainly on what Fruits de Mer originally set out to deliver - classic and wilfully-obscure songs taken from, or heavily influenced by, the 60s and early 70s".

It would take me whole night to go through all the tracks included here and you can see the song list with data where they originate from over here. Fruits de Mer have been one of my favourite labels since the beginning but only listening to the promo CD-R version of this release has made me really understand what an enormous amount of magnificent, beautiful and mind-blowing music they really have put out during their ten years of existence. Also, most of my favourite modern bands have been covering most of my 60s and 70s favourites! In addition, several 60s/70s psych rock/folk masters have contributed with some fresh, new recordings as well as rare tracks from the past. It really is almost too good to be true. I would have possibly picked a few different tracks for the compilation, but I still like them all a lot. It's actually impossible to even pick ten favourites among the 30 tracks included. Let's just say that this a perfect opportunity to get some of the very sought-after songs that Fruits de Mer have released and also a great introduction to the label for the uninitiated. Goldfish should be available at the beginning of May. The price is not too bad either for such a massive release so I'd warmly recommend preordering it right away!