Back to the Garden Records 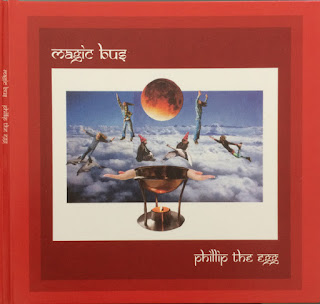 Once again I'm about one year late with a review but better late than never I guess... Magic Bus is a new U.K. based progressive rock band playing a very cool version of Canterbury Scene Caravan styled jazzy, psychedelic prog rock fusion. I have reviewed their previous album over here and they have also released a couple of excellent 7" singles on Fruits de Mer.

This 45-minute CD includes eight tracks. The album kicks off with the almost nine-minute "Mystical Mountain" that has a lovely, sunny and positive vibe before the more mystical, heavier instrumental ending. I'm mostly reminded of  Caravan and later all also Gong and I really can't complain about that. "Fading Light" is a shorter, slow and peaceful instrumental piece that somehow brings to mind Mahavishnu Orchestra, very smooth and nice. Next we've got the semi-acoustic, beautiful "Trail To Canaa" and I'm in Camel wonderland. I really like the vocals and flute on this one and the solo part towards the end is killer. "Zeta" has a cool, swinging rhythm and bit Oriental vibe. "Distant Future" is the second longest track on the album at 7:11 and it must be one of the most progressive. Things get rather intense and heavy at times, but there are also more atmospheric parts. Superb! The space sounds later on bring to mind Gong. "Kepler 22b" is another rather long track and perhaps closer to King Crimson than Canterbury Scene. There's maybe some Gentle Giant influnces in there too for good measure. On "Kalamazoo" the band chills out for nice, acoustic moods. The great album is finished with "Yantra Tunnels" that starts with a minute of drone before going into very cool, sort of Indian style prog rocking. The end of the track seriously rocks out! A good way to end an amazing album. I just realized that this is out on vinyl as well, I really need a copy.