Lucille Furs - Another Land / Leave It As You Found It 7" 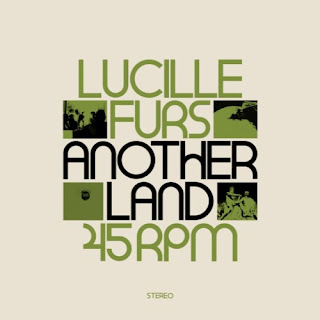 Lucille Furs is a dreamy psychedelic baroque pop band from Chicago. They have previously released one 7" and one album last year, but the first time I heard about them was when I got sent this new 7" single that was recently released. The band has taken quite a lot of influences from the 60s psych pop/rock scene but they still have a fresh, melodic and interesting style of their own. If you know artists/bands like Jacco Gardner, Balduin or Temples and remove the modern technology you sort of know what to expect. I guess you could call this 60s inspired psychedelic baroque indie pop.

This new single has two new simple but catchy songs: "Another Land" backed with "Leave It As You Found It". "Another Land" starts off in a slow, mellow mode bringing to mind The Doors and The Beatles, but soon goes into a hypnotic, mid-tempo verse. I really enjoy the soft dreamy vocals. The slow intro returns for a while after the short chorus and then we go again. There's a little lead guitar part and the track is over. Simple but brilliant! You just have to put it on again, since you are hooked right away. The B-side is a funny little, fully orchestrated number that I don't find that captivating but it's still okay. It only lasts under two minutes, anyway. This single comes on tasty green vinyl and is available now on Treehouse Records. I'm already looking forward to the band's next album! Check them out.