Traffic - Where the Poppies Grow 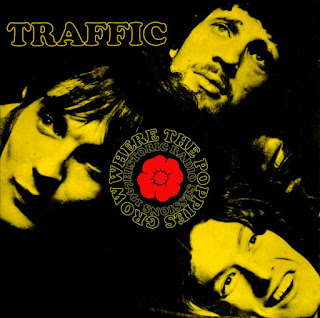 This is a nice present for all you early Traffic fans and lovers of 60s psych pop/rock in general. The CD is filled with restored and newly mastered tracks now available on CD for the first time. Nine first tracks are from the band's two BBC radio shows in 1967. The first show was aired October 1967 and the second one December of the same year. Now I just got to say that the sound quality is not that great compared to modern standards but still very good and the excellent music is still highly enjoyable, warts and all. Included is of course the band's first hit "Paper Sun"  and I just love that song. Other highlights include "Coloured Rain",  "Dear Mr. Fantasy", "Heaven Is In Your Mind" and "Dealer". I'm only a little bit disturbed by the occasional Dj introductions, but I can live with them.
The last seven songs were recorded live at Radiohuset, Stockholm, also in 1967. This is another radio broadcast and the sound is pretty similar but no dj talk here. Because these tracks were recorded in front of a live audience they have more live vibe with for example some cool, bluesy jamming  on "Giving To You". Some of the tracks are the same as on BBC radio shows but we do get for example their second early hit "Hole In My Shoe" (my second favourite Traffic track!) starting off with a nice sitar intro and the nine-and-a-half-minute "Feelin' Good".  "Paper Sun" is a rather energetic version! It would have been amazing to be in the audience during this gig... All in all, Where the Poppies Grow is a great historical document of one of the greatest psych pop groups in the 60s. Check it out!