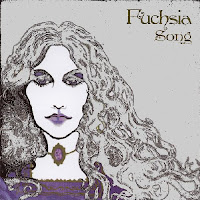 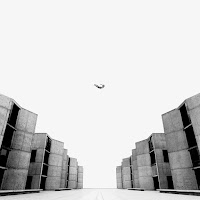 These are the albums I've been ejoying the most this month: 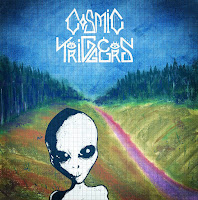 Mother Russia keeps on giving birth to great psych bands, just check out Polska Radio One, Cosmic Letdown or Maatlander for example. Cosmic Triggers from Saint Petersburg is the latest addition to the ultra spacey, tripped-out and cosmic psych rock family and this is their first album. Homo Fractaliens has just seen a limited vinyl release on the superb Adansonia Records that has introduced people to stellar bands like Kungen's Män and Fungal Abyss.  Cosmic Triggers is formed by Anastasia Skabelkin (vocals & analog synth), Vladimir Skabelkin (guitar, ethnic, synth), Vladimir Kolbin (guitar), Russel Petrov (drums) and Tagir Khisamov (bass) and I have a feeling that these cosmonauts are going far and high.

The LP starts off with the laid-back, slow and droney "Introduction" where the band jams in relaxed mood while Anastasia gives brief cosmic messages.  After three-and-a-half minutes the title track rocks a bit more in a groovy, very cool style taking you deeper into space. Before the two-minute-marker the track turns into a reggae/dub styled jams that goes on for another five minutes tripping you out. "Undermind" is a nine-minute, hyper cosmic ambient piece that is perfect for the soundtrack of your favourite psychedelic trip. I love the ethnic/tribal, very spaced-out vibe on this one. Later on some percussion is added. I can imagine some ancient cave paintings being made my shamen with this music on... Wow! The mysterious "Syndicate" is more rock oriented stuff again and brings to mind the hazy, mescalin-fuelled soundscapes by Liquid Sound Company. This is very deep stuff and puts you in a trance! "Quant Um" is the only little faster number and comes closer to krautrock, Vibravoid or Hawkwind. My only complaint is that it is a bit short, but I guess you could say the length is just perfect at 4:20. The album is finished with a loose space jam called "Shutsuryoku" that keeps you lingering on in zero gravity for another six minutes. I got to say that Cosmic Triggers is one of the best and most interesting bands that I've encountered this year and I really advice you to receive their cosmic transmission. Amazing stuff! 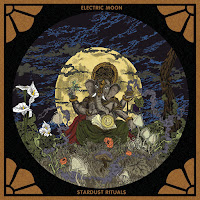 With Stardust Rituals Germany's Electric Moon must have created their best ever release so far. The trio of Sula Bassana (guitars, e-sitar, mellotron, organ, e-piano, effects), Komet Lulu (bass, bass synth, vocals, space echo, effects & Marcus (drums) give us all you might expect from an Electric Moon album and more. It seems like a bit more planned/written album than before, although there's still room for the heavy and mind-blowing space jams as well. I also like the fact that Lulu is singing on most of the tracks.

The eight-minute "Loop" starts off in a beutiful way with organ and soft guitar. Soon the rhythm section joins in and then Lulu's very spacey and cool vocals (think of Brainticket or something) are added to a great effect. Wonderful! After some laid-back lead guitar work the track gets more intense and hypnotic and really starts to rock in space. Wow! One of their best tracks for sure, I hope they also play this live. "Stardust (The Picture)" is a heavy, repetitive and hypnotic track that also has nice vocals from Lulu, this time not so manipulated. Some cool jamming, psychedelic space sounds and mind-blowing guitar soloing on this one. We are all stardust. We're made of the Sun. We're all made of stars. That's why we're one. That's the message for you all! Ten minutes goes past fine with just one simple riff when you are trippy as hell. "Astral Hitch Hike" is the only shorter track on the album at 4:44. This is a peaceful, emotional and touching piece with nice electric sitar to give it an Eastern icing. Mellotron adds its own dimension and this truelly is a blissful journey. The albums longest track is the almost 23-minute "(You Will) Live Forever Now" the begins in a very laid-back, sleepy manner but slowly grows into a full-blown heavy space rock mind fuck. Some sitar and quiet vocals in this one as well. Here the band gets rather metaphysical and spiritual even... The ending just blows my mind... Excellent!

The first blue marbled edition of the LP version is already sold out but the second pressing is available as well as the CD version. I must also add that the cover art on both the vinyl and CD editions is phenomenal and suits perfectly the mystical, majestetic mood of the amazing music. Maybe my favourite album in 2017 so far! I'm really looking forward to see Electric Moon live again later this month, and the first time in Finland! Welcome space cadets, we love you. Finnish freaks, make sure you make it to Tampere on 14.7. or Oulu on the following day, you won't be dissappointed.