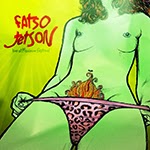 The playing and singing is fluent and the band seems to be enjoying themselves. I’m sure that so was the audience! Sometimes the band gets more progressive (like on “Nightmares Are Essential”), and they’ve also got some Blue Öyster Cult and even punk vibes bringing to mind The Dead Kennedys or something like that. Fatso Jetson really aren’t that psychedelic except at times when they take time to jam a bit later on in the set, but they rock out and kick ass. A must have for all the Fatso Jetson fans!