Desert Lord: To the Unknown

Under a Serpent Sun Records (USSR-2) 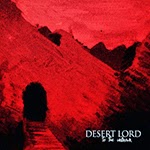 To the Unknown is the debut album by Finnish stoner doom metal band Desert Lord following the Salvation 7" released in 2011. This quartet knows how to put together songs that have cool riffs, atmospheres enough variation and ideas to keep things interesting. The vocals are melodic but bit on the harsh side and suite the music just well.

This CD includes six songs and most of them are pretty long. The band kicks ass with the rather energetic opener "Forlorn Caravan", but things get slower and doomier with the over-nine-minute "Wonderland". There's some cool solo guitar on this one! The longest track (9:45) "Expanding Egos" starts off with an atmospheric acoustic guitar part, but gets heavy in two minutes with a dark, Sabbath-like doom riff and starts to rock out more later on. One of the highlights, I think. The mid-tempo “New Dimensions” somehow reminds me of The Obsessed, and also has a short, nice acoustic passage with spoken word. “Manic Survivors Song” sounds a bit out of place at first, and I don’t really like the rest of it either that much. The last song “Become Aware” is slow and heavy doom metal again, and a lot better piece. There’s also some cool stoner jamming involved! The vocals are mostly clearer on the two last tracks. Try this out if you like heavy stoner doom metal with a twist.