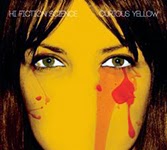 This is the sophomore album by acid folk/art rock/kraut rock/electronica band Hi Fiction Science from Bristol. I first got to know them through their appearance on Fruits de Mer Records compilation A Phase We've Been Through and also loved their first, self-released album and other songs released on FdM later on. The self-produced Curious Yellow was mixed with Jim Barr (Get The Blessing / Portishead) and sounds totally awesome. The very intriguing artwork and cover design is by Johnny O (Rocket Recordings). One important feature is the female singer Maria Charles (Ex-Fuzz Against Junk) who has a wonderful, clear and lovely voice like some of the best folk singers in the 60s/70s. The band's music is not overtly psychedelic or mind-expanding, but very emotional, thought-evoking and sometimes exciting, but mostly relaxing.

They start off with the hypnotic and mysterious sounding "Digitalis" that is one of the best songs on the CD I think. "Circles in Halftone" is a more tranquil and hypnotic piece until it starts to rock out during the few final moments. The melancholic and beautiful "Magpies "(Againts the Sun)" is closer to folk rock and much more melodic. The vocals bring to mind Annie Haslam or even Kate Bush! Lovely. "Vapour" is one of the bit more energetic tracks on the CD and even has some progressive elements especially on the guitars. The title track "Curious Yellow" has some 80s electronic pop and also kraut rock vibes and works out really nicely too. "Komorebi" is just a short, soothing vocal/keyboards piece, and then it's time for the pretty, dreamy ballad called "1000 Years". Musically the closest comparison might be Sigur Ros, and the same goes for the beginning of the next track "Fragmenting Sons" that starts to rock out in the post punk vein later on. The album is finished with "Squaretaker" that somehow reminds me of 80s King Crimson, among other things. Not bad at all! This is a very enjoyable and interesting album and people with rather different tastes in music might enjoy it. Give it a chance!