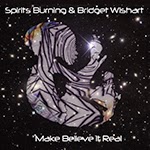 This is the third CD under the band name Spirits Burning & Bridget Wishart, the first two being Earthborn and Bloodlines, both released in 2009. Although ex-Hawkwind singer Bridget has taken part in other Spirits Burning projects as well (12 CD's released in total), on these three her impact is much greater. This time Don Falcone's international collective has given us a double CD, with the tracks on CD 2 being bonus tracks. Other musicians featured include Daevid Allen (Gong, as always), Hawkwind family members Dave Anderson, Harvey Bainbridge, Steve Bemand, Richard Chadwick, Alan Davey, Paul Hayes, Simon House, Dan Thompson & Twink (Pink Fairies) and lots more... Phew!

As usual, the musical style and atmosphere differs quite a lot from song to song. There are 11 tracks on the first, actual CD. The songs that rock out the most are the pretty heavy "Demonkind", "Revenant" that sounds like '77 Hawkwind and also has lots of cool space sounds and cool space rockers "Eternal Energy" and "SpaceRocknRoll". The opener "Make Believe (It Acoustic)" is closer to folk with beautiful guitar, violin, flute and soft vocals. The more ambient tracks like "Cyber Spice" and more trancey, electronic pieces like "Be Careful What You Wish For", "Skyline Signal" and especially the excellent and mystical "Embers" sound very nice too. The first CD ends with the fourteen-minute, mostly acoustic "Reflections" that's quite mellow, but progressive track with lots of piano, acoustic guitar and wind instruments and also some male vocals. This sounds a bit like modern classical music, not really my cup of tea but still pretty nice somehow also reminding me of Renaissance.

On the second CD we have six bonus tracks.  "Always (Spirited Away)" is a new (and very good!) mix by Don and includes for example some nice violin by Simon House. What an excellent track! "No One Cries in Space" is another remix and pretty chilled out, just like "Iceflow (Icetalk Mix)". "Take Up Thy Stethoscope and Walk" was originally released on the Pink Floyd tribute More Animals at the Gate of Reason that I don't have, so it was a pleasure to hear this for the first time. "Make Believe It Real" was previously released on the Hawklords Friends and Relations compilation that I also missed and sounds very cool and mellow. "Chain of Thought" is a special track that Bridget and Miles created and donated to Spirits Burning, and I like it a lot since it's a little heavier than usual.

All in all, this is another great album by the Spirits Burning collective and every fan of progressive space rock and experimental ambient/electronic/acoustic music should check it out.