Various Artists: 7 And 7 Is 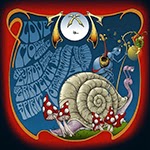 Wow, what a marvelous and beautiful single box by Fruits de Mer! This superbly assembled 7" box includes seven singles of new cover versions of classic US garage psych songs from the 60s. The bands could pick their favourites form the Golden Era themselves, and we get some Love, 13th Floor Elevators, The Byrds... I think you got the picture.

First, we have The Bevis Frond interpreting two songs by Clear Light, a band that I'm not that familiar with I'm afraid. The Frond of course has been one of my idols for decades so I'm totally excited about this! The short but sweet "Night Sounds" fits perfectly for Nick and sounds pretty much like some his original tunes. There's lots of wonderful fuzz guitar in there too, but organ is playing very important role here. And don't you just love Nick's vocals? Well I do, anyway. "Sand" has a nice march beat and again killer guitar and organ work. Another winner! The Higher State (great band name, by the way!) give us two (not that known) tracks by The 13th Floor Elevators ("Wait for My Love" & "You Don't Know"), and do an excellent job at it too. The wonderful Chemistry Set have chosen Love songs "A House Is Not a Motel" and "Live and Let Live", and it's easy to hear that Love is one of their biggest influences. The first one starts off in an acoustic mode which is nice. Also "Live and Let Live" honors the original and sounds just amazing. Lovely vocals harmonies on both of them! United States of America never was as big or well-known than The Elevators or Love, but they still are an important part of 60s US psych history. Sendelica are the perfect group to interpret them, and the groovy and psychy "Hard Coming Love" and the pretty, strange and dreamy "Love Song for the Dead Che" also have great female vocals. Absolutely stunning! King Penguin gets to play two songs by The Byrds, "She Don't Care About Time" and "5D (Fifth Dimension)" and they sound superb with rich, lush instrumentation. San Francisco's Moby Grape gets treated next by The Gathering Grey resulting quite different, but very good versions. On the last 7" there are Black Tempest doing a very nice version of Spirit's "Nature's Way" and finally The Seventh Ring of Saturn doing their best on "Cream Puff War" by The Grateful Dead. These band's just had to be covered here too!

There are only 700 copies of this beauty including coloured vinyl (red, white and blue) and a folded poster and I'd like to tell you to get it right away before it's too late!