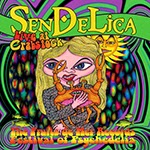 Here's one more Fruits de Mer related release. This is the first official live album by the great Welsh space/psych rock band Sendelica recorded at the first Crabstock - The Fruits de Mer Festival of Psychedelia in Cardigan on April the 26th this year. There was also a Finnish and American versions of the festival later on. The CD version has one more track (the 12:31 long "Spaceman Bubblegum") that couldn't fit on the vinyl. The short "Standing at the Edge" starts off the set like usually and we're in for some heavy psych rocking. The 16-minute "Manhole of the Universe" sees the band jamming more and there's some excellent sax and electronic space sounds too. Very nice! The Pink Floyd inspired "Set the Controls for the Heart of the Buddha" is next and we are transported into some mystical, alternative reality. "Motorik Jam" shows the band's love for kraut rock and gets pretty wild later on. Then it's time to chill out with the beautiful and mellow "Screaming and Streaming into the Starlit Nite" and "Return of the Maggot Brain", both more or less homages to Funkadelic's "Maggot Brain". Wonderful solo guitar from Pete as always! The vinyl ends here, but CD and download also include the encore "Spaceman Bubblegum" and it's worth it to get this one way or the other since it is one of their best tracks/jams in my opinion and very spacey. The sound quality on this disc is not perhaps just as good as on the band's studio albums but still very good and I'm really glad that this instrumental live album got released on this new Fruits de Mer of-shoot label. Warmly recommended!