Spiralmaze: Back to the Center 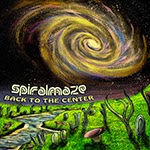 Spiralmaze is a quartet from Chania, Greece, playing instrumental, trance/techno oriented instrumental, psychedelic and progressive space rock in the vein of Ozric Tentacles. Their latest album could almost be a lost Ozrics album from ten years ago or something. I'm saying this as a compliment, since the production, musicianship and vibe are all of high standard! There are a lot of programming included, but the band still uses real guitars, bass and drums as well, so there is a strong organic rock element in there too.

The album begins with the high-energy electro-rocker "Multiverse" and it's almost impossible not to dance. There's enough variation and very psychedelic soundscapes as well! "Hwang Ho" is a tad more soothing with its nice delay guitars, soaring sequencers and mellower parts, but also rather fast and rhythmical. I like it a lot! "Remipede" is heavier and more intense and also rather progressive and includes some samples too. Reminds me of Hidria Spacefolk a bit, and also has excellent solo guitar, like many other tracks too. "Myriad Small Creatures" is again like from the Ozrics song-book, but now it's time for psychedelic dub. And why not, since Spiralmaze can handle that as well. Samples are used to add some ethnic flavor. "The Longest Day (Part I)" is a four-minute spacey and ambient synthesizer piece, and during the long and excellent "The Longest Day (Part II)" the band goes into very danceable territories. Amazing worlds appear in front of your closed eyelids! The CD closes with the at first sort of tribal sounding, percussive title track "Back to the Center" that starts to rock out after 90 seconds. Great and tight going! This reminds me of the Finnish band Taipuva Luotisuora who also have ingested their share of the Ozric Tentacles. The beautiful end part sounds more like Porcupine Tree, though, but not bad at all. I realize I've been comparing Spiralmaze to a lot of other bands so let's also give them some credit for inventive, nice, original compositions and excellent musicianship and style. Check them out!