Polska Radio One: Cosmos Inside 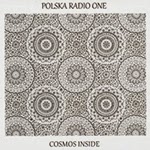 Despite the band's name, Polska Radio One is a great Russian band playing hypnotic, trance-inducing and mind-altering psych/kraut/garage/space rock. Definitely one of Russian's finest in this genre, I must add! This is their debut album, but there have been several self-released singles and EP's before. There are four young guys in the band and a quest is playing sitar on a couple of tracks, and one of the members plays electric tampura, while the guitar player/singer, bass player and drummer all also play keyboards. Some of the songs are sung in Russian and some in English, and both the production  and musicianship are excellent.

The very hypnotic and repetitive "The Final Mantra" is a good and moody opener, that somehow brings to mind The Dead Skeletons as well Dragontears. Next we've got one of the highlights called "The Fractalized Sky" that has a lot of lysergic and groovy 60s garage psych vibe in the vein of 13th Floor Elevators etc. I love this song and have also used it in my Astral Visions internet show! "Time - Eternity" is a little bit more chilled-out, Eastern-tinged piece with sitar and brings to mind Vibravoid for example. Superb! "Morosim (2 C-P Dub)" is a bit more experimental, hazy number somewhere in between Pink Floyd and early kraut rock. The mysterious "To the Delta of Aquarius" brings back golden memories form the late 90s/early 00s sounding a bit like Liquid Sound Company or Strobe. The going gets more intense later on and we're transported into another inner galaxy, just close you eyes! On "Shangri-La" the band delivers more 60s psych vibes in a rather mellow mode. "Launch #93" is the shortest track at around three minutes and features acoustic guitar and spoken samples as well as droney keyboards. The longest trip on the CD is the ten-minute title track "Cosmos Inside" and it's a real masterpiece of spacey, fuzzy, trippy and hypnotic psych rock. Definitely suitable for Vibravoid fans! Finally, we get a single cut "Rhymes & Armonies" as a bonus track, and it's a relaxing, soothing and pleasant way to end this amazing album a bit in the Spacemen 3 vein. I've heard that this album will also be released on vinyl and I'm thrilled since this is one of this year's best releases for sure!