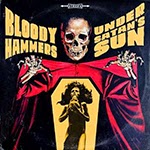 Bloody Hammers is a new band from North Carolina and released their third album (in just two years!) this spring. I have not heard their two first albums, but at least Under Satan's Sun is musically somewhere in between occult rock, metal/hard rock and Gothic rock, and sometimes it works, sometimes it doesn't. It's been described as dark horror rock, and they sure use a lot of horror movie imagery.

I like the first track "The Town That Dreaded Sundown" that sort of reminds me of Jex Thoth and stuff like that (although with a male vocalist) and also has some Roky Erickson in it. "Spearfinger" is definitely more metal and pretty average. "Death Does us Part" sounds too much like the love metal of Finnish band HIM and I don't like that. The singer is closer to Eric Wagner of Trouble/The Skull though! "The Moon-Eyed People" is a heavier, almost doomy metal track that's pretty cool. "Second Coming" is of course a cover version of track by Alice Cooper and Bloody Hammers do a pretty decent job, although I don't like their phoney modern keyboard sounds. "Welcome to the Horror Show" is a melodic, mid-tempo Gothic metal song that they could play in radio metal shows I think. Not very interesting in my opinion. The title track "Under Satan's Sun" is closer to Roky and the Aliens, except for the metal guitar sound. "Dead Man's Shadow on the Wall" rocks a bit faster, and "The Last Alarm" sounds like 80s post punk/Gothic Rock and chorus reminds me of the Dead Kennedys. The final track "The Necromancer" starts off with some dark, atmospheric horror movie vibes and then rocks hard and heavy with also some gloomy doom parts. Not bad at all! In summary, this album didn't really turn me into a Bloody Hammers fan boy, but it definitely has its moments, and people into heavy horror rock should check it out.