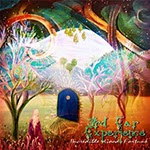 Yes, it feels so good to be exposed to a new space/psych/prog rock band as great as 3rd Ear Experience! I have somehow totally missed this amazing band from the States, even though they have released a couple of albums before this one. Recorded live in the Furst Wurld Performance and Art Gallery in the Mojave desert, this 76-minute-long space trip includes just five long, hypnotic, cosmic and psychedelic instrumental tracks of highest quality. This is the kind of music that you will want to get into a trance with.

The album begins with the almost 20-minute instrumental "Tools" that has a soothing, tranquil intro before the tight space rocking starts. There's plenty of synthesizer space sounds going all over the place and I really love that. The track also has some killer solo guitar work, and a soft, floating ambient part with some saxophone, that also continues until the end. What an excellent opener! Another long trip "One" is next, and we are transported into space with this one. Again a mellow, spacey intro, and then some hypnotic, heavy space rocking! This one also has vocals and a sort or mysterious vibe. The end is very quiet and meditative... Another killer track! On "Parsley" the band gets more progressive, but they still stay spacey and psychedelic as well. You are allowed to totally chill out at the end. The shortest track "White Bee" is next and it's very relaxing, slow and mellow stuff with female vocals and some heavier moments later on. The last track "Shaman's Dream" rocks hard again reminding me of Hidria Spacefolk from Finland or even Ozric Tentacles. I'm loving the shaman chanting! The song has a more progressive, slower verse  that brings to mind Hawkwind's "Dying Seas" with its chord progression. Another superb track, and it's impossible to say what's my favorite since I love them all! Good news is that this CD will also see a vinyl treatment by the excellent Space Rock Productions so you can soon buy this beauty on 2LP as well. I know I will...