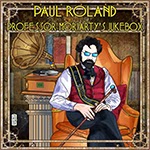 The master of psychedelic Gothic/horror rock and baroque pop and folk is back! After the release of a brand-new studio CD's Bates Motel (2012) and Hexen (2013)  it was now time for a compilation CD. But this is not your ordinary collection of old classics: Professor Moriarty's Jukebox compiles together ten recent, unreleased high-quality radio session tracks with nine alternate versions, outtakes, remixes and rarities making this a very interesting package indeed.

So the CD starts off with ten re-workings of Mr. Roland's classic songs from the 80s onwards. He had put together a new live band in 2012 and decided to record these songs in a studio for radio use since they sounded quite different and I must say that these are excellent versions with a full line-up including for example violin to give you some extra chills down your spine and also some folk vibes. My personal favourites are the opener "Re-Animator", the beautiful melancholic ballad "Captain Nemo", the rocking "Tortured by the Daughter of Fu Manchu" and the haunting "Nosferatu" that I think is one Paul's best songs ever. "The Crimes of Dr Cream" works out very well too and "I Was a Teenage Zombie" from the Bates Motel has lots of power and energetic, wild guitar solos! Great stuff. You can hear that Paul's getting a bit older, but it doesn't matter since he definitely still can deliver the vocals and has matured well.

The last nine tracks on the CD originate from various sources and times. Most must be relatively recent, but at least "Death of a Clown", a folk rock outtake from the Sarabande sessions,  dates from the 90s. "Meadow of the Sea" (unreleased re-recording from 2007) rocks out the most. Unreleased versions of "Fairies" and "Eight Little Whores", unreleased acoustic versions of "I'm Not Like Everybody Else", "Kali" and "Bates Motel" as well as remixed version of "I Dared the Devil" present Paul in his psych folk mode. The album is finished with the rather minimal cover version of Joy Division's "Day of the Lords" that was originally released last year on a Joy Division tribute album called Shadowplay. Paul makes the song sound like one of his own, so he does a good job I think. All in all, this is a pretty interesting and enjoyable collection of songs, please check it out. And while you're at it, also have look at Paul's many fascinating books on the occult, paranormal etc.