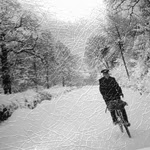 Tor-Peders was a short-lived Swedish instrumental beat/psych/prog/garage/surf rock outfit that released just one single in their lifetime and played some shows. The excellent guitar player Jonas Redmo was tragically run over by a car and killed in August 2011, and that was the end of the story. Until now, when the band’s DIY rehearsal recordings from spring 2011 are released on an LP + 7” package by Fruits de Mer’s sister label Regal Crabomophone. And I’m glad these recordings finally see the light of day since this is absolutely great stuff in the late 60s/early 70s spirit! The drummer Johan Svedmyr also plays in Me and My Kites, the bass is played by Tobias Rech and organ, pianet and synthesizer by K.G. Westman (Siena Root, OSC etc.).

The album starts off with “Aye Makami”, a very nice, organ-heavy surf/prog/psych number. I really like it! The George Martin classic (covered also for example by Van der Graaf Generator) “Theme One” (or “Tema Ett” in Swedish, as they put it) follows and I’m even more excited. This is a very powerful and spirited interpretation of this great track. “Småfaglars Värn” begins with drums and experimental psych sounds and then the whole band join the jam. Sort of reminds me of the ancient Swedish psych folk bands with a jazzy feel! “Islossning I C-moll” is a rather up-beat and groovy number with some great solos. Think of the first two 60s Deep Purple albums and you are close. “Incident vid “Domsted” is the longest track at 10:55 and starts off slowly and peacefully with a sort of spooky atmosphere. After a long build-up the track really begins but it stays slow and tranquil although getting heavier. Great! Another long piece “Sinnet Rinner” ends the side two of the LP in melancholic and bluesy moods. The 7” includes two more tracks. “Signed TP” is of course the band’s own, slower instrumental take on Love’s “Signed D.C.” and “L’espirit d’escaliere” a melancholic, bluesy piece with some Swedish folk influences on the melodies I think. This one has previously been released on a very limited CD-R promo single on Fruits de Mer. All in all, this is a very soulful, warm, fuzz-filled, classy and interesting release that comes in a cool textured cover so just get it before it’s gone. A future classic from the past!