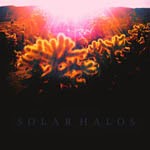 Solar Halos is a new heavy stoner/desert/doom/psych trio from Chape Hill, North Carolina, and this album released in January on vinyl, CD and digital is their official debut after releasing Demos in 2012. The band members have previously played in Horseback, Curtains of Night, Fin Fang Foom and Caltrop. The singer/guitarist is female which brings in some nice vibes I think, since I really like her strong voice.

"The Vast White Plains" starts off the album in the Kyuss/Colour Haze vein with some Sleep overtunes and I'm already hooked. "Frost" is a bit doomier and slower track and on "Migration" they get a bit more atmospheric still being rather heavy and hypnotic. On the slow "Wilderness" you can really feel the vast empty space of desert while "Resonance" takes us on a more varied, epic journey. The last, long song "Tunnels" is a bit bluesy but also more progressive number that sort of brings to mind The Obsessed. In summary, this is a cool, heavy and atmospheric album and I'm sure that most doomy stoner/desert rock fans will enjoy it.