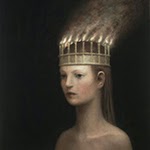 Mantar is a German metal duo formed a couple of years ago. They don’t have bass, just guitar, drums and screamed, almost black metal styled vocals. This is their debut album and pretty heavy, harsh and brutal stuff but still groovy and with complex and interesting enough riffs and arrangements. Some of the stuff sounds like late 80s progressive thrash metal like Coroner, some like punk/metal cross over bands, some like Bathory, some Voi Vod and who knows what else. Well, I haven’t really followed the (extreme) metal scene since 1990 so maybe other people do know… This is definitely not something that I would totally go nuts about, but the music still kicks ass and keeps me interested. They use a good combination of fast, mid-tempo and slow parts so it’s not just one thing going on and on. ”The Stoning” is a bit closer to stoner rock except for the vocals. The last track ”March of the Crows” is rather epic and doomy and since it also does not have any vocals it is probably the highlight for me. Massive sound with just two guys!