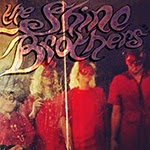 This is the debut album by US psychedelic garage rock band The Shine Brothers that first saw the light of day last year as an limited tape release in the US. The UK edition on vinyl (200 copies on red, 300 on black) and CD was a bit late and released in January 2014 on the magnificent Cardinal Fuzz. Like most of the stuff they put out (well, maybe I should say ALL!) this is a killer album. The songs are usually pretty short (three-minute-something), but there are also three even shorter ones (the energetic opener ”Climp the Ladder”, the fast and furious ”Cago Palo” and easier ”Only Time Will Tell”) and one eight-minute, slow psych monster (”When Wendy Burns”). The songs are all rather 60s inspired, I can hear echoes of several US psych garage bands like The 13th Floor Elevators, The Seeds etc., but there are also for example some Stones vibes on a couple of songs and much more.

The Shine Brothers have a some what trashier and rawer attitude to interpret the 60s garage rock than for example The Black Angels or some other hip bands at the moment and their sound is not overtly polished although the album still sounds good and very real. They use some harmony vocals that work out great and sometimes remind me of The Byrds or even The Beatles. I also like the organ sound and other instruments. My favourite tracks are the up-beat, melodic and even pop-like ”Creation”, a little The Doors-like ”Innocent Girl”, the funny, cheery and groovy ”Drug Dogs” and the highly lysergic ”When Windy Burns”, but I actually like most of the songs very much. Check it out!