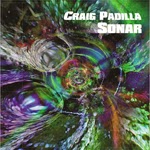 Craig Padilla is an internationally known electronic music artist from the US whose music I first encountered last year on the first disc on the Strange Fish series that he shared with Sendelica. The guy has been writing, recording, releasing and performing cosmic, electronic ambient for twenty years, though. This double vinyl includes seven of his unreleased instrumental tracks from 1996 onwards. He has picked the tracks that best go with the 70s kosmische vibe and done a great job.

First we’ve got the short intro “In Search of Stranger Fish” and then “Velvet Moon” also includes some chilled-out electric guitar in the middle of the sequencers and synthesizers. This is very nice and relaxing like Astralasia’s most laid-back pieces. “Cosmic Dawn” is the longest track on the first disc at 14:30 and very Tangerine Dream/Klaus Schulze inspired. Spacey and psychedelic stuff. “Challenge Deep” pulsates through your brain like a trans-dimensional space ship, and “Behind the Lightning” starts off in a very tranquil and floating mode but gets more intense later on having also some electronic beat. LP two has just two long tracks: The title track “Sonar” (composed and performed with Skip Murphy) and the sort of New Age styled “Awaken to a Dream” and they are both epic journeys through mind and soul leaving your spirit renewed and freshened. This is a very welcome album to all lovers of cosmic, electronic ambient music.