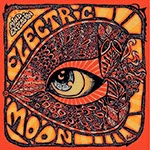 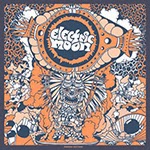 Okay, here we have two latest offerings by German free-form heavy space/kraut/acid/stoner rock pilots Electric Moon. Dave and Lulu have now scored a permanent drummer it seems, since Marcus Schnitzler has been around for some time now as well. And he's the right man for the job, no question about that!

Electric Moon is a live album released on CD (March the 7th) and 2LP (April the 11th). The CD is strictly limited to 500 copies and the marbled vinyl 2LP in open gatefold to 1000. This album includes a wild live concert from Feldkirch, Austia, at the end of their 2013 European tour. The band is in excellent mode and really rocks and freaks out! Despite the somewhat primitive recording technique the sound is really good (mastered by Eroc as usual) and when you put the volume up you feel like you're experiencing this live in the front row. There are four long improvisations all filling up one side of the double vinyl. "Trip to the Moon" starts off the gig with the usual, monotonic and hypnotic way with lots of spacey effects on top of the heavy jamming. Dave (Sula Bassana) also has a Casio Organ that is clearly audible at the end. Great! "Kaleidoscopeephole" begins in a very tranquil mood but starts to rock slowly around the three-minute-marker. Its effect on the human brain is pretty kaleidoscopic alright... Just close your eyes and you will start to see colorful patterns! As usual, they pretty much stay in one chord, though. "The Picture" starts with a simple bass line by Lulu and it's another heavy, hypnotic rocker but with somewhat more groove and some stoner rock vibes. I'm reminded of Monster Magnet a bit, although this is of course purely instrumental and more psychedelic. Great track! The title track "Mind Explosion" finishes off the album in a very cosmic, psychedelic and magnificent way. This is the fastest jam on the album and gets pretty wild... The audience seems totally out-of their minds after this one!


Innside Outside is the brand-new album and will be released on limited coloured vinyl only in a week or two. I first thought that this was a studio album since the promo sheet didn't mention it being live but live it is. This is the first album to be released in the UK, where they have been touring successfully for a couple of year now, so I guess they're getting bigger... This time the cover art is by Ulla Papel, not Lulu Artwork!, but she's still responsible for the layout. This album has only two tracks, but they are very long as always... "Innside" starts off peacefully with some spacey effects and floating organ and builds up slowly into a slow, heavy and mesmerizing groove. It has a very trippy, almost narcotic quality that puts you in deep trance. Things get a bit faster and more energetic later on, and I love it! "Outside" on the B side might be the less cosmic of the tracks but this rocks in a psychedelic stoner rock way. This one is suitable for some serious head-banging as well! Very intense stuff by the band. Both of these releases are highly recommended for the fans of the band.