And Then You Die: Sore 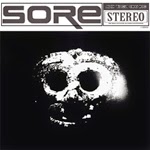 And Then You Die is a mysterious, dark industrial/Gothic/electronic/shoegazer/etc. project from Finland. They jam in Vasa a few times a year and then produce these stoned, hypnotic and droney improvisations into psychedelic, distorted, gloomy, desolate, post-apocalyptic soundscapes that can almost be called songs. It seems that lately they have mainly released stuff in digital download format, but there are also something out on CD and vinyl. Sore is their latest offering and features seven powerful tracks.
"Für Immer" is not a Neu! cover, but a dark, low-pitched ambient soundscape with distorted bass and guitar with lots of effects. On "Blank Note" the band also uses electronic beats and this is a very hypnotic, spell-bounding track with very Gothic and somehow tribal vibe. I like it! "Far Gone" is a perfect title for the spacey track that combines slow electronic dub beats with almost surf-like, atmospheric guitar and some almost whispered vocals in the distance. You can also tense some melody and electro pop sensibilities on this one. Brings to mind some of the stuff my Massive Attack. "2224" is the shortest track at 3:32 and is a nice,  improvisational jam with little a sinister vibe. The longest piece on the release is "As Bright as a Falling Star" that is very distorted and dark and only starts to move in the middle when the heavy, repetative bass and guitar pattern begins. This is highly hypnotic for sure. "One Two" is melancholic but not as dirtorted or warped us most of the other tracks. Closer to Gothic rock, I guess. The danceable electronic beat joins in at some point and changes the mood a bit and we also get some other variation to the background. "Jesus Does Not Love You" starts off with some hallucinatory sounds, and then we've got industrial post-punk beat and heavy distorted sounds with some really manipulated, whispered vocals in the background. Dark and psychedelic but also a bit groovy stuff! This strange, dark goody is available on Spotify and iTunes.
skithundrecords.com
Lähettänyt Unknown klo 8.46