Earthling Society: England Have My Bones 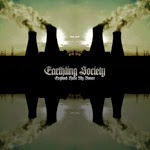 Hailing from the misty islands of Albion (Fleetwood, North West England to be exact), Earthling Society have been recording albums in their secret private studio for ten years now. This very psychedelic and spiritual group has been inspired by mythology, sci-fi, space rock, psychedelia, kraut rock and cosmic folk as well as mushrooms, speed and beer and you can definitely hear all that in their music. I've been a fan since the beginning, and the band has never let me down. Their latest creation is the totally out-of-this-world album England Have My Bones, their first one on Riot Season, and probably their best yet.

The LP has just four tracks, but three of them are really long. "Aiwass" begins peacefully with some drone and soft guitar growing gradually. This almost instrumental track gets a bit more intense before the four-minute-marker but stays quite hypnotic and meditative.  The end is more experimental and noisy. Very trippy and spacey stuff! "Tortuga" is a very nice, atmospheric and mysterious mid-tempo piece that gets you in trance before you know it. This one also has proper vocals, although heavily effected and a bit buried in the mix. Your mind will be blown later on... I love this song! The B side starts off with "Journey into Satchidananda" and its an Alice Coltrane cover of the most cosmic degree. And this one is over fifteen minutes long... Fred plays some killer solo guitar and things get really spacey and inspired. Phew! The last, shorter track "England Have My Bones" is at first rather chaotic and experimental but cools down into soft, floating, semi-acoustic psychedelia. What an excellent album to escape your dull everyday life with! Earthling Society will take you to places where you have never visited before.