Deep Space: Through the Haze 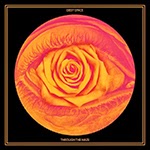 Deep Space is a psychedelic acid rock band from the birth place of psychedelia: Austin, Texas. You can hear the influence of the old gurus like 13th Floor Elevators, but unlike bands like The Black Angels, Deep Space doesn't really write catchy tunes with sweet melodies but concentrate on long, trippy, heady and repetitive excursion into the center of the mind. And I like it! This is their debut vinyl album. The band sadly got some bad reputation due to their main man Robbie D Love pretty much fucking everything up at Berlin Psych Fest that he was organizing earlier this year, but I'm not the one to blame anyone on the catastrophe since I don't know the details and there might have been lots of bad luck, legal issues, lack of experience, being too out-of-it etc. involved. But I know a lot of bands and fans are upset. Anyway, let's leave that subject and check out this cool album instead!

There are five tracks on the marbled vinyl limited to 500 copies only. They start off with a heavy rocking "Work" that sounds pretty much like Wooden Shjips, White Manna or bands like that and I'm already hooked. One riff with lots of acid fuzz guitar, a steady beat and hypnotic vocals is all it needs. "Vibrations" is a longer (11:15), slower song that also has some early Spacemen 3 vibes. Very nice and heady stuff, that also has some variation with an atmospheric jam etc. The A-side ends with a sort of 60s garage rock styled, faster "Inner Light" that also some organ. Things get pretty wild here... "Motorcycle" (not a Wooden Shjips cover) is the longest track at 15:30. This one sounds very mystical and hazy, almost like The Doors on some of their slower, dreamier and hypnotic songs. I like the cosmic spoken word on this one. Very trippy shit! The album is finished with the nine-minute "Lady Heroine" and this one is in the Velvet Underground vein and has again some pretty psychedelic guitar work. I hope the band can work out the problems and carry on since this actually is a pretty solid and psychedelic debut album.