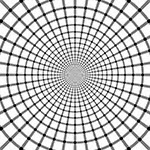 Astralasia first started as an offshoot of 80s and early 90s free festival/space/psych/prog rock outfit The Magic Mushroom Band, who just happen to be one of my all-time favourites. I really liked their early albums that were psychedelic, partly electronic ambient and trance music but by 1998’s White Bird album I was not really that interested anymore since the main guy Swordfish chose a much more commercial house/dub/club/trance approach. Then nothing apart from a couple of compilations happened in the Astralasia camp until in 2006 when a new double CD Away with the Fairies was released. I have not heard that one, but I bought the next couple of albums that were released on limited vinyl on Tonefloat. Swordfish seemed to be back on track and I was excited. The news that Fruits de Mer sister label Regal Crabomophone was going to release a new album by Astralasia totally caught me by surprise, since this was not the kind of band that you would think they would be interested in. But listening to Wind on Water it all makes complete sense! There’s none of that house music crap left, this is just psychedelic, hypnotic, floating, ambient and yes, even kraut rock oriented mind music and I love it.

”Rangoon” starts off the LP with tranquil sequencers and synths. Very up-lifting and atmospheric. The title track ”Wind on Water” is one of the highlights and also includes some cool guitar. After more peaceful beginning the track gets into motorik kraut groove that goes on for many minutes and I’m in psychedelic heaven. Things cool down at the end and we even get some acoustic guitar. Wow! ”Cresta Run” is a more ambient/dub in nature but very celestial and wonderful and I’m reminded of solo stuff by Hawkwind keyboardist/violinist Simon House. This track was already recorded in 2006, says the promo sheet. ”The Innosence” is abit more experimental at first and then gets close to the hypnotic early 90’s stuff. We get some acoustic guitar, sounds of waves and even manipulated vocals in the end which is nice. Trippy stuff! After the four tracks on the LP there’s also a 7” to go! ”The Desert” (also recorded in 2006) has piano, windy swooshes, keyboards, violin, harmonica and narration. The dub beat joins in after a couple of minutes and we also get some tasty electric guitar and acoustic stuff. Not bad at all! The last track ”Continuim” opens up slowly and softly and then starts to rock in the 70s Pink Floyd style. A very cool piece! I don’t have the actual finished product yet, but the pictures of the very special hand-printed optical art PVC sleeve look totally amazing, so get this limited (700 copies) LP + 7” package before it’s gone! The best Astralasia album since What Ever Happened to Utopia? twenty years ago.