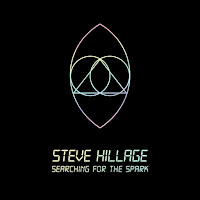 Now, if this is not the ultimate Steve Hillage fan's dream come true then I don't know what is. This MASSIVE box set includes 22 (yes, twenty-two!) CD's worth of recordings from 1969 to 1991. So the story begins with the wonderful Uriel/Arzachel and Khan albums that I love so much. This is where Steve's career in music really started. Then he of course joined Gong for a series of amazing albums, but this box does not have any Gong stuff. Sure, Steve's first solo album Fish Rising released in 1975 features most of the members of Gong, and that's what we'll get next, followed by his eight other olo albums. Most of the albums have several extra tracks that have never been heard before... Very interesting!

After the official solo albums it's time for one System 7 album, and then for six discs of live material and four discs of demos and archive material from 1970 to 1990! What a treasure trove this is. At this point I must declare that I have not heard the whole box. I only received the one disc promo version of it, but it includes seven tracks of demo/archieve/live material and gives a good picture of what's inside the box. The sound quality isn't always top-notch on the demos, of course, but that's not the point. The point is to give a definitive picture of a career of one of U.K.'s most talanted, creative and unique artist.

In addition to the actual music, the box also includes a hard-back, 188-page book, a 60-page scrap book, two lyric booklets, three promo posters, an enamel padge, a plectrum and a certificate of authenticity signed by Steve Hillage and his partner Miquette Giraudy. I really wish I could afford to buy this beauty and I'm sure you won't find these at bargain sale anytime soon since this is a strictly limited edition of just 2500 copies worldwide. Definitely warmly recommended for die-hard fans and those who really want to find out about Steve Hillage and happen to have big pockets.