Sun Dial - Made in the Machine 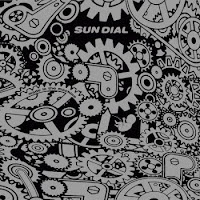 U.K. neo-psych rock band Sun Dial has been one of my favourites since the 90s and a new album by them is always a big deal for me. Made in the Machine is the band's second album for German based Sulatron Records following Mind Control put out in 2012. Things happen pretty slowly at Sun Dial camp these years, but I'm just happy that they are still releasing new music!

I got to say I was rather surpriced when I first listened to this album, as it's the most electronic the band has ever put out. The 2LP/CD has 14 new tracks and some of them are instrumentals. The album starts off with the hypnotic "Meltdown" and what a great, somehow krautrocky track it is! "Contact" and "Ascension" are two of the electronic instrumentals and pretty spacey and out there. The use of programmed drums and dancey vibe might feel a bit weird on a Sun Dial record but I got used to it. "Sea of Rain" is a more laid-back, melancholic and pretty song with cool synth/keyboard soundscapes and manipulated vocals. "Space Dust" is one of the grooviest tracks and also one of the highlights. This instrumental brings to mind the very psychedelic and groovy CD's by Japanese Christine 23 Onna that I love. Also the sampled astronaut talk fits in perfectly... The motorik "Aurora" continues the astronaut theme in samples, great. "Sun Gate" takes us even further and it's a peaceful, spacey instrumental with a little bit of dub feel to it. "Generator" finishes off the first album with droney soundscapes, heavy, doomy fuzz guitar, slow, hypnotic beat and weird, mantra-like vocals. Highly effective!

"Eclipse" is another atmospheric, laid-back instrumental, and "Autopilot" a very strange and experimental track with an Eastern vibe. "In the Machine" has steady sequencers, odd synths and a krautrock beat and apparently no guitar. On "Dark Planet" the band gets deep into space again in an electronic, old-school Berlin kind of way. I like it a lot! The electronic vibe continues on the mellower "Slipstream" but there's also some cool, psychy guitar on that one. Nice! The album is finished with "The Gates of Eden" that maybe sounds the most like vintage Sun Dial since it's guitar driven and has real drums and those druggy vocals. It also has organ, vibraphone etc. to give it an airy, floating touch and it gets heavier towards the end. Another killer record by Sun Dial, one of the best album in 2016!