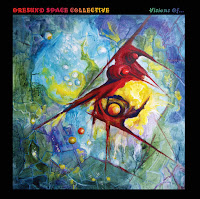 Visions of... is the second new studio album by Øresund Space Collective this year following the awesome Ode to a Black Hole. There have also been a few vinyl issues of albums previously available only on CD, so there has been a lot stuff to dive into for the fans. This is the 23th(!) ØSC release and recorded by a loose collective of American, Swedish and Danish musicians at the same, long jam sessions than Different Creatures and Ode to a Black Hole. The album is released on one CD and 2LP and includes one, massive track and three shorter (to ØSC!) tracks.

The album kicks off with the 42-minute title track. The beginning is very abstract, ambient and somehow free-jazzy, but the beat starts before the three-minute-marker, and slowly the track grows and gets more intense. There's some excellent guitar in there, and the usual spacey, windy analogue synth sounds that are so essential to all ØSC releases. This is a rather groovy but still airy and floating, long piece and I enjoy it a lot! The track is of course divided into two parts for the LP versions. On "Above the Corner" the band gets funky, and although they do it well enough, it's not my favourite modes for them (or anybody else, for that matter). The synth-driven "Piece of Seven" is the trippiest track for me, since it's probably the most psychedelic and has a cool, tribal beat going on. A bit different for ØSC which is a good thing. "Around the Corner" is the most rocking track and maybe the highlight for me after all. Something that also Dark Sun could have done at their rehearsal jams... very cool improvisational space rock stuff! Another killer album by these inner  space astronauts, get it while you can since at least the vinyl editions are again very limited in quantity. Things will now cool down a bit for ØSC since the head wizard Dr. Space is moving out of Denmark in Spring. They will still continue to record and play live, luckily. The farewell party will take place on March 18th at Loppen, I for one will be there...