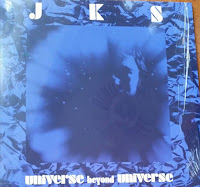 Jorma Saarikangas is Finnish amatour musician and poet from Lahti. He used to record these weird, experimental and psychedelic soundscapes in the 70s at home with a primitive gear and has been releasing these previously unheard home-recorings on limited edition vinyl issues since 2004. This is the fourth (and final?) part in the series and limited to just 250 copies.

The overal vibe on Universe Beyond Universe is very experimental and weird. It's composed mostly of cosmic synth experiments, but there is also some spoken word, strange, manipulated, howling voice and vocals and a little bit of guitar etc. All the tracks 11 tracks (three of which are only very short intros/outros) on the LP have been recorded in between 1974 and 1976. "Cosmic Travel Begin" and "The Big Crunch" are credited to Hannu Pohjonen, who must have been a good pal of Jorma's in the 70s, as both guys sound like they operated at the exactly same brain wave lenght. The drum machine on "Greatest Story Ever Told" sounds so very 80s that I'm having hard time believing this is from the mid 70s? Anyway, this is probably the best release in this series and very psychedelic and odd. Universe Beyond Universe is definitely worth checking out if you enjoy the weird, trippy lo-fi home-recording vibe of the 70s. I'll just end here with a quote from the back cover to get you some idea: "All this life is part of Divinity. The meaning of life is to develop intelligence into such high level that, when the end comes, it can recreate itself... When the whole of existence collapses, the excisting life-forms will be able to code a new script on the generation of a new universe.The past and the future will be perfectly omnipresent when the divinity says: LET THERE BE LIGHT."