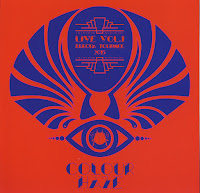 Colour Haze from Munich, Germany might have started as a Kyuss worship act in the mid 90s, but they have matured into an original, very influential heavy psych rock band during the years. They are one of the longest-running bands in the Europe's heavy/stoner rock genre and have played with this ultra tight trio line-up since 1999. For some reason they have only released one live album before this one, the Burg Herzberg Festival 18. Juli 2008 double CD in 2009. Live Vol 1 Europa Tournee 2015 was recorded at several locations on the band's two-week-plus European tour in 2015 and features a perfect collection of real live tracks spanning from most of their career, but concentrating on the albums after 2000. This is a massive 2CD/3LP set, so the fans really get a lot of great stuff here.

The album starts off with "Periscope" that dates to late 90's. Very cool to hear a live version of this desert rock classic! Also the following two tracks, the groovy "Moon" and the longer "Überall/Call" were recorded in Frankfurt, as well as the ultra-long "Peace Brothers and Sisters" Colour Haze anthem that comes later on. The tracks are in a little bit different order on the CD and LP. The Cream inspired, even jazzy and progressive "She Said", the much shortened version of "To the Highest Gods We Know", the hypnotic "Circles", the amazing "Temple" and the even better "Love" all are from their Paris show. The extended "Aquamaria" is from Würtzburg, and the excellent "Transformation" and "Grace" from Berlin. The CD version has one more track recorded in Köln: "Get It On" originally from the CO₂ album released in 2000. My only wish is that they could have included something from Los Sounds de Krauts (2003) and this was the album that I first heard from them.

Anyway, as you might have guessed, this is the real deal with no overdubs what so ever, so you got to experience live Colour Haze as it should be: raw, honest and full of emotion and the pure joy of playing music that they love. This is a killer band both in studio and live, and it's really cool for the fans to have this live album to enjoy. These guys play really put 100% of their energy and emotion into their music and you can feel that.