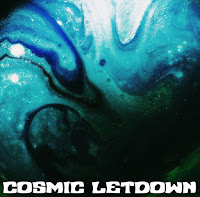 Venera is the debut album by Russian psych/space/shoegaze rock/pop band Cosmic Letdown. It was released in Russia on CD already in 2015, but this limited edition on Clostridium Records earlier this year is the first vinyl release of the album. They also released their second album In the Caves this year on Opium Eyes (Russia, CD version) and Sound Effect Records (Greece, vinyl). On that one the band went in a bit more spaced-out, experimental direction... On this debut the songs are still rather short and simple but very effective. The melodic vocals are in Russian which sound cool but I don't get what they're are singing about.

The band uses guitars, bass, drums, keyboards and sitar to make druggy, heady, hypnotic, swirling and sometimes groovy soundscapes that sort of bring to mind late 80s/early 90s U.K. indie psych rock bands. "The Sea" will please The Verve fans and especially a couple of tracks sound pretty much like Spacemen 3. But there is more... One of the highlights is "Venara-6" that also has some weird spoken samples in Russian and early Pink Floyd vibes. I really like all the tracks and the album is very pleasureable as a whole. This vinyl is hopefully still available as three different versions: die-hard limited to 98 on green vinyl with exclusive poster, blue vinyl limited to 199 copies and  black vinyl limited to 200 copies. All versions are hand-numbered and feature five cards with pictures of the members. Check it out! Personally I can't wait how the next album will sound like...