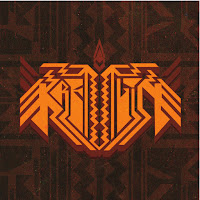 Kremlin is a new band from Helsinki playing "Southern space rock". This self-titled mini-album is their first release, and it is a cool mix of heavy, bluesy boogie, twang guitar, surf, Roky Erickson, Black Sabbath and analogue space sounds. There are six tracks on the record and I will now go through them all.

The mini-album starts off with the very Roky Erickson styled mid-tempo "Ghost Flyers" that also has some surf like twang guitar and some space noises. A very nice opener with powerful vocals and strong playing, it rocks! The second, slower track "Krühn" is closer to Black Sabbath and has some great melodies as well. I like it! "Waiting for You" is a bluesy, more atmospheric number, but not bad at all. "Lizards" is the heavy boogie piece of the album and gets your foot stamping. There's also a rather psychedelic, hypnotic part in the middle... "Transition" is a shorter, cosmic instrumental synth interlude that sets the mood for the melancholic, doomy and dark last track "World Is Coming Down" that does not give much hope for our future. Again, the vocal lines bring to mind Roky a bit which is not a bad thing at all. All in all, this is very promising debut release by this new band that's definitely worth keeping your eye (or ear) on. You can see the band live on the 17th of this month when they play with Albinö Rhino, Kaleidobolt and Getsemane at Ääniwalli, with Yours Truly as a dj. This should be fun!