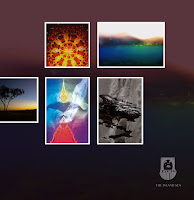 Ahkmed are an Australian psychedelic and atmospheric space/stoner/post rock band and this is their second full-lenght on Elektrohasch following their great 2009 album Distance. I also have the Russian CD Chicxulub that compiles their early EP's. I have a feeling that this band is relatively unknown to the great audience in Europe, but I'm sure the die-hard psych/stoner/space rock heads know them all over the place. The band's songs are getting longer and longer and more adventurous, so this CD/2LP has only five tracks.

The album kicks off with the rather heavy, energetic and rocking "Kaleidoscope" and you can see the colours swirling around. From the middle onwards the track is atmospheric, hypnotic post rock, but erupts into orgasmic space rocking again towards the end. Amazing! "The Inland Sea" starts in a very laid-back, dreamy way but slowly builds up after the three-minute-marker and gets into a cool stoner rock groove. Then it chills out for a while, and the end of the track is excellent, slow and dreamy post rock with heady spoken vocals. Probably my favourite, phew! "Last Hour of Light" is the longest piece at over 20 minutes, and has a lot of different emotions and styles going on. The beginning of it is peaceful, atmopsheric post rock, but then the heavy and mind-melting space rocking begins! The last nine minutes are spent floating in experimental ambient soundscapes. "Pattern of Atolls" somehow brings to mind their label mates Colour Haze and has both heavy and beautiful moments. The album is finished with the 16-minute isntrumental "The Empty Quarter" that slowly grows and evolves like Explosions in the Sky stuff. Another great album by the band and I advise you to listen to this with headphones on and your eyes closed for the best and most psychedelic effects.