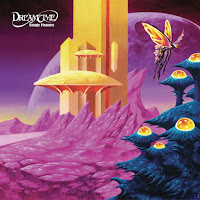 Strange Pleasures is the third album by Australian psych/space/prog rock band Dreamtime. It is released today on 2LP by Cardinal Fizz (U.K.) together with Australian labels Sky Lantern Records and Tym Guitars. Their first two vinyl albums were originally released in tiny quantities (100 pieces each) and I have not been able to locate original copies unfortunately... There are some (again limited edition) reissues for those who are reasonable enough to be able to live with those. Anyway, this 76-minute album limited to 500 copies is so wonderful that you definitely need to hear it if you like mystical, spiritual, dreamy and psychedelic rock music.

The album has 12 tracks, most of which are rather long. The superb opener "Luminous Light" sets the tone in a great way. The groovy beat, great, fuzzy guitars, synths and female vocals sort of bring to mind Goat from Sweden, but this is a bit more progressive and melodic. Excellent! On the next track "Golden Altar" the band gets more spiritual and spacey, this is really deep, hallucinatory, atmospheric and beautiful stuff, that gets more intense later on. "River Sprites" is a pretty and melancholic song with male/female vocals and a sort of ancient folky vibe. The bit heavier, amazing and hypnotic "Fire" brings to mind Liquid Sound Company (like some of the other tracks) and also Hills and I love it. The last track on the first disc is the meditative and deep "Ascension" and I again enjoy the male/female vocals very much. Before the three-minute-marker things get weirder and more experimental, whoah!

"The Sentient" has an experimental, spacey ambient intro, and then the band goes into heavy, hard-rocking and rather fast space rock mode sounding like a mix of Hawkwind, Monster Magnet, Chrome and Yuri Gagarin but with a twist of their own. My mind is blown to pieces! The title track "Strange Pleasures" is more progressive and even a bit funky and reminds me of some of the early 70s psychy prog rock bands. The spacey and atmospheric instrumental "Celestial Spores" is the shortest piece at under three minutes, and then it's time for the album's longest track "Spectral Entrophy". It starts off slowly, and has a great, uplifting vibe that brings to mind DarXtar or Melting Euphoria, some very cool solo guitar work and a trippy overall mood. "Gamma Gobulin" is another weird, experimental and ambient instrumental piece that seems to come directly from the Australian aboriginal dreamtime. The album is finished with the powerful and mind-blowing psych rocker "Serpent's Tongue". This album is a true masterpiece of spiritual, psychedelic and mind-altering space music and definitely one of the best albums in 2016. Do not miss it!