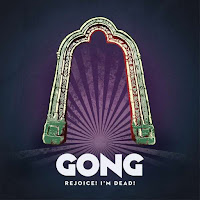 Gong has been one of my favourite bands for decades. For many fans it was a bit hard to think of the band continueing after Daevid Allen sadly died in March 2015 after battling with a fast advancing cancer. I must say I also had my doubts, even if that was exactly what Daevid had wanted and the present members had already played and recorded with him for a while. After that we have also lost Gilly Smyth, another key character in the history and mystery of Planet Gong. Now the band is fronted by guitarist/singer Kavus Torabi, who some might know for example from his band Knifeworld, and I got to say this new album released in September is really good and a worthy addition to the Gong saga.

The standard CD and the 2LP both have nine new tracks starting with the relatively short (3:34), sort of introductory "The Thing That Should Be". As you can already guess from the album title, much of the record deals with the death of Daevid Allen, but mostly as a transformation to another stage, so the overal feel is still quite positive and soothing. "Rejoice!" is a more progressive, long piece with Steve Hillage guesting on guitar. The band goes into some deep, hazy atmospheres later on and I love it. This sure sounds like Gong! "Kapital" is a pretty weird, shorter track, and "Model Village" a beautiful, floating piece with old Gong member Didier Malherbe guesting on duduk. Wonderful! The very melancholic, rather minimal "Beatrix" is the shortest track at 2:54, and I almost started to cry when I first heard the distant voice of Daevid Allen, and the track still has the same effect on me. Next we have "Visions", an ambient excursion. The longest track on the album is "The Unspeakable Stands Revealed" and it's a marvellous, trippy and jazzy journey with lots of different turns and twists. Amazing! "Through Restless Seas I Come" is a meditative, peaceful and pretty tune that gets more intense and alive later on. Didier is also featured on this one. The album is finished with "Insert Yr Own Prophecy", a very cool and partly more energetic track that sounds and feels quite a lot like early 70s Gong which I think is great. What a marvellous trip! There is also a special 2CD/DVD-A release also including demos, rehearsals and a 5.1. mix of the album.

I know this must have been a difficult album for the band to make, but I can honestly say that they have done a great job and I know Daevid Allen is very happy on his flying teapot somewhere out there seeing that the legacy of Gong continues on this plane as well...