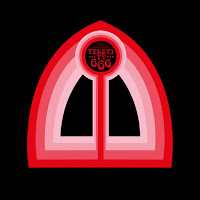 Teksti-TV 666 is a new Helsinki-based band known for their very energetic live shows. They have released one limited edition 12" EP a year since 2014, and these three EP's have always sold-out pretty quickly. It was a wise move from Svart Records to release all the EP's as one double LP/CD, so that people have the opportunity to buy these great tracks. The band's music has strong roots in punk, indie, noise and krautrock, and has also some psychedelic vibes. Most of the tracks are rather fast and straight-forward with a steady, motorik beat and LOTS of guitar. The guitars are the main thing here for sure, although most of the tracks also have vocals in Finnish.

I've been lucky to score all the individual EP's and have been enjoying them a lot. Teksti-TV 666's music works well in small doses. However, since most of the simple but effective tracks sound and feel sort of the same, a double LP compilation might be a bit too much in one setting. Maybe they could expand their musical scale a bit in the future? Add some synths at least? More cosmic, experimental vibes maybe? Well, I'm sure they will do what ever they feel like and that's just fine by me, since they are hip and they seriously kick ass. Check them out!