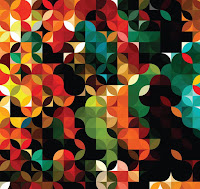 Glowpeople is a loose, psychedelic instumental collective from England formed in 2010. I have reviewed their two previous albums and got this third one months ago but been too busy to write about it until now. Sorry! The band has been playing around the U.K. alternative festival circuit (Unorthodox Paradox, Onboard the Craft, Aberjazz, Kozfest, Hastrek...) and you can definitively sense the free festival spirit of the 70s and 80s in their vibe. Their music is mostly free and improvised, spacey, jazzy, funky, floating and partly electronic. The lineup features: Chriss Hill: trumpet & guitar, Robot: bass guitar, Nick Raybould: drums & percussion and Chriss Cordwell: keyboards, bleeps & loops. The closest comparisons I can think of are Ozric Tentacles, Gong, The Orb and a few others but the Glowpeople do have a sound and style of their own I guess.

This 49-minute CD/download has nine tracks ranging in length from just over two minutes to over eight minutes. Most of the stuff is instrumental, but there are also some manipulated human voice like on the excellent and groovy "Electronique Blue". At times they go pretty far into the head country (just check out the hallucinatory "Algebra" and "Ground Zero", for example!), but usually they are rather listener-friendly and enjoyable. Probably not radio-friendly, though... So quite far away from mainstream, thank God. There are some dub elements in there as well, so their music should please a rather large group of the different kinds of mind explorers out there. I do like them! Worth checking out.