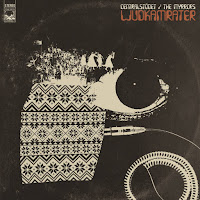 This is a very cool split album by Centralstödet from Sweden and The Myrrors from Tucson, Arizona. Centralstödet is a relatively young band and this is the first time I've ever heard them but The Myrrors have been my recent favourites for a couple of years now, thanks to Cardinal Fuzz. I fear that the two limited edition vinyl versions of this release might have sold out in advance (at least the copies from Cardinal Fuzz), but maybe you can still buy either one somewhere or get the CD edition.

Centralstödet offers three tracks of improvisational, instrumental, free floating guitar-driven hard psych/prog rock on side A. The opener "IE" lasts for ten minutes and is rather slow, droney and also heavy. Nice! "Yttre Hybriderna" is a shorter, a little bit groovier piece that gets more intense towards the end. Their last track "Vegas Bodega" rocks out more and have some late 60s / early 70s Swedish psych rock vibe I guess.

The Myrrors are in the league of their own. You are immediately transported into some strange, far-away place full of magic and wonder when their first track "Rayuela" kicks off. After six minutes of hypnotic, druggy going the track changes into a slower and more dreamy "Night Flower Codex" that takes the rest of side B. This one has a strange, somehow ancient feel to it and even though it seems there is not that much happening superficially it totally takes you on a trip. Get this split LP if you can, you won't regret it!