Sounds of New Soma: Beyond the Acid Dream 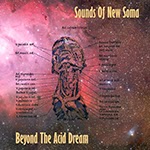 Sounds of New Soma is a new German duo playing spacey, psychedelic, experimental, droney and ambient music. With a band (and album!) name like that you can easily figure out where their main inspiration comes from. As the info sheet tells, "they formed Sound of New Soma in 2013 in order to materialize their tonal vision of a cosmic voyage in the aftermath of a psychedelic trip". This is their first official release, but you can also find some other stuff on their Bandcamp site. The duo of Alexander Djelassi (guitar, bass, synthesizer, effects) and Dirk Raupach (synthesizer, vocals, effects) is here augmented by saxophonist Andreas Lessenich which gives the otherwise rather electronic sounding album a sort of organic free jazz vibe.

There are four long, instrumental pieces on the album. "Zeitenraum" begins the journey in a very laid-back, floating and cosmic mode. There is no beat or any rhythm, just ambient soundscapes and sax. Nice. "Im Rausch des Alkaloids" also has some bird-song and narration in German, which works great. Towards the end, a deep, pulsating "heart" beat is added, and the very hallucinatory track grows a bit. On side B, "Traumfänger" has a bit more audible guitar and bass than the tracks on side A, but the similar, laid-back, cosmic and hazy vibe continues. "Nektar der Götter" even has something that could almost be called a guitar riff. The most cosmic old kraut rock gurus ride their long-haired heads, I suppose. I'm also reminded of the very ambient, laid-back space elements of Astralasia. This album is not for those who want their music to rock out, but if you are looking for a trippy, chilled-out, beautiful and atmospheric journey through your inner space this is the LP you need.