Friends of the Fish (Promo 2) 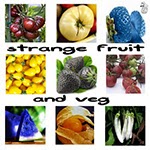 Fruits de Mer Records from the UK has a very strict policy of releasing only vinyl for the public, but they do make exceptions with promotional CD's. That's a good thing, since otherwise a lot of good stuff that doesn't have room in their 7" and LP release schedule would remain totally unissued. Strange Fruit and Veg is one of those lovely, rare compilations that's only available as a freebie for those in the UK who are in the Fruits de Mer Club or  anyone else who orders the new Cranium Pie 2LP from the excellent Heyday Mailorder early. Okay, some copies also go to reviewers like me, but there's no other way to get a copy.

This is a massive, 75-min/18-track CD with some very cool psych sounds. Most of the songs are covers of 60s/70s psych numbers, but there are also a few original tunes. A couple of bands make their debut on Fruits de Mer, namely Trojan House and The Telephones. The disc starts off with Crystal Jacqueline's great version of "All Over the World" by Strange Fruit and ends with Syd Barrett's "Vegetable Man" rendered by The Mystery Crystals, so I guess that's how the compilation got its very suitable name. We have a really varied lot of of songs originally by for example Velvet Underground, Amon Düül II, Hawkwind, The Beatles, Bo Diddley, Jimi Hendrix, Crosby, Stills, Nash and Young and even Motörhead! Yeah, you read it right, Motörhead. Some of my favorites include the opener, ZX+'s version of the Stones track "She's a Rainbow", the AD II cover by Mauve la Biche feat. Cary Grace, Jay Tausig's "Ace of Spades" (Motörhead, of course...), Vert:x with Hawkwind's "Circles", Magic Mushroom Band's version of "King of the Rumbling Spires" (T. Rex), "Tomorrow Never Knows" by Rob Gould, "Take a Heart, Alt. Version" (The Sorrows) by Schizo Fun Addict and the Syd cover by The Mystery Crystals. Having said that, there really is no dull moment on this excellent disc! I'm sure Keith from Fruits de Mer had a lot of fun putting this psych monster together and so will the music lovers while listening to the disc! Another important reason to pre-order the amazing new Cranium Pie 2LP that I reviewed in January.