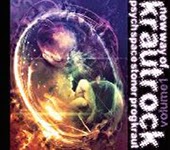 Tonzonen is a new label from Germany specializing in psych, space, stoner, prog and kraut. Last year, they released debut albums by two bands on vinyl plus this compilation CD featuring tracks by modern German bands who, at least loosely, fit in the krautrock genre. I'm glad to have this album since there's some bands I had never even heard before, although I'm somewhat a follower in this scene.

The CD starts off with the 33-second-long, electronic, hypnotic and psychedelic "Underground Äxpärten Jingle" by Das Raumpiloten. Underground Äxpärten seems to be a loose psychedelic collective in Germany with a website and some parties, sounds like fun... Lover303's "Jezt Geht's Los" starts off with some electronic beats and female voice with tons of delay, but later in develops into a groovy and percussive deep space kraut rock jam also featuring electric guitar and lots of space effects. I was only familiar with this band from the Mani Neumeier's Birthday! CD where they are featured. I've been a fan of Electric Orange since the 90's though, so it's nice to notice that they are also featured on this CD with their mid-tempo track "Chorg", and I don't at least remember hearing this one before. Things get pretty interesting as the track developes... True modern masters of the krautrock world! Knall is the next band, and they offer a groovy and jamming track called "Weed Porn". Just guitar, bass and drums, but that's enough. Tonzonen will release an LP by them next month.Sounds of New Some is a new great ambient/space drone/psychedelia band that I really like. Here we get a track from their new digital EP "Mahatma Macht Mittag" and are being transported into another, strange universe. Great that this piece also has drums later on. I'm also familiar with the band called The Spacelords since they sent me some of their CD's for review a couple of years ago and I also bought their LP put out on Sulatron Records last year. "Prelude-Rhinoceros-Bison" is apparently taken from their live album , great stuff! Aphodyl is a band I had not heard about before, but fell in love with. They are included with the massive, almost half-an-hour space/kraut/psych jam called "Pyramide of Slave" and truly catch the essence of the original cosmic, free-spirited hippie krautrock ethos. Larman Clamor, another unknown act for me, ends the album with teh short but sweet "Tangerine Nightfall" that just has organ and acoustic guitar. Nice! Get this CD if you want to know what some of the modern krautrock bands sound like. And remember that there are a lot more bands to discover!