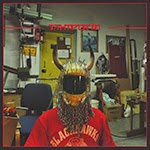 Tähtiportti (Stargate in English) is a Helsinki-based electronic, experimental and psychedelic trance group featuring Sami Albert "Witchfinder" Hynninen (ex-Reverend Bizarre, Opium Warlords etc.) narrating strange, dark, occult/sci-fi texts in Finnish. The music is made by Ilari Larjasto aka Stiletti-Ana (also member of the synth band Jesse), the legendary Finnish musician and producer Mikko Viljakainen aka Vilunki 3000 (Barefoot Brothers, Larry and the Lefthanded, Op:l Bastards etc.), and  musician, columnist and radio personality Perttu Häkkinen aka Randy Barracuda (Imatran Voima, Itäväylä etc.). I think the project made its first appearance in 2009 on a Record Store X Christmas compilation CD, but their first eponymous 7" was released in 2013 and the second 7" III ja IV followed in 2014. Both singles were very limited editions on their own Iron Magnesium Records. Their sound is a very leftfield, sinister version of downbeat elektro, something that you can imagine being played at some forbidden, nihilistic, insane, hot, dirty and drug-filled underground  party in Berlin twenty years ago.

The album starts off with the rather short instrumental intro called "Kruunujen kruunu: Karjaportti / Himon portti". Spacey and interesting... "Tähtiportti I" is a sinister, gloomy and freezing elektro track that makes you see dark hallucinations. "Tähtiportti II" is a more ambient affair, but just as dark and cold with some cruel and forlorn stories by Sami. Then we get a very cool, spaced-out and hypnotic version of an old homo-erotic classic "Poikarakkaus" originally performed by Finnish philosopher Esa Saarinen in 1984. What a great idea and well done too! This just might be a hit, at least in some weird, occult alternative reality... "Olen oikeassa! Lihaportti / Joulunportti / Tiedonportti" is at first rather minimal elektro with danceable beat but grows on its way when some more synthesizer and sequencer layers are added. One of my favorites is also danceable "Tähtiportti III: Ikuinen talvi" that really gets the listener into a deep trance. Great and highly effective! "Tähtiportti IV: Lusiferin pylväs" is one of the weirdest tracks with a long, narrated list of Finnish bearers of the secret occult knowledge with a rather minimal backing beat and Slavic sounding, melodramatic melody. I love the alien/satanic sounding vocal effects on this one... This makes you believe that the Apocalypse is at hand. "Viimeinen tähtiportti" ends the album in very dark, melancholic and weird mode. I'm not sure how this album works for you if you don't understand any Finnish but I think you can still get the message... Very strange and deep stuff, I like it! You can pre-order the album now and make sure you also get the 7" singles before they totally disappear into other dimensions.

Get the vinyl version here...