Love Machine: A Present to the Galaxy 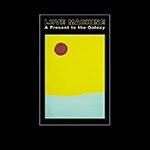 This is the debut album by a young German band called Love Machine. They play a pleasant, often quite sunny and nice retro pop/rock/blues in the 60s/70s style reminding me of The Doors and the Westcoast, as well as Leonard Cohen. Even though two of the four songs are long, I wouldn't say this band is really that adventurous, experimental, cosmic or even very psychedelic. The singer has an interesting, deep and low sound but it seems to me he has not been singing that long yet. Not that he's bad at it, but the little lack of experience somehow shines though at times. Well, I guess the same goes for the whole band, but these are young guys so no wonder. They have some potential and ideas, anyway! Plus my wife wanted to know what band this was...

"Hermes Red Shoes" is the first track, and it's a laid-back, melancholic and bluesy one. It's pretty cool stuff, but I'm having some difficulties in maintaining my interest for over 11-minutes. "Flower" is the mellow, soft, summery and a bit jazzy pop song of the album. I wish they would have used real Fender Rhodes and Hammond Organ instead of the synthesizer sounds. Works okay as it is, though."The Vision How the Office Becomes a Hurricane" is a rather moody and soft track but not that spacial. Finally, the title track "A Present to the Galaxy" gets a bit more adventurous & jamming and it's 19 minutes in length. This one also has some saxophone which is great, as well as a more experimental, psychy middle part. I think the band still needs some more substance to their music (as well as for example guitar solos!) but this already is a pretty good start.