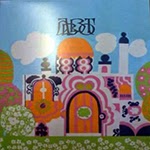 This is the second 7" release by a Finnish doom/stoner/retro rock band Abbot. I have not heard their tape release, first single or the brand-new album recently released by Bloodrock Records in Italy, and only seen them play live once in Tallinn last year. Their live performance wasn't that good with a bit out-of tune vocals, somewhat lazy playing and mostly mediocre song material, but this single sounds pretty cool. Black Sabbath is an obvious influence, maybe some other 70s hard rock too. "Holy Mountain" is a slow/mid-tempo, heavy and sleazy doom boogie lasting for over five minutes. The vocals are okay on this one, although nothing exceptional. There's also some flute in there that gives a nice extra vibe. The end part with some attempt to guitar soloing is faster boogie. "Black Book" is faster heavy boogie stuff (think of Deep Purple without the organ for example) and only lasts for a little over two minutes. The vocals sound like Absoluuttinen Nollapiste trying to sing in English with a somewhat bad pronunciation which is not a very good thing. Musically, there seems to be something essential missing in this band that would make them special in some way, hopefully they have found it on their debut album. They already dress up like your average 70s/retro hard rock group from Sweden so the image is already there.